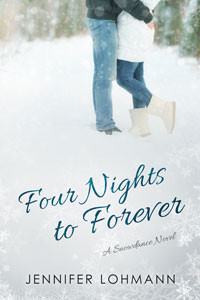 Can a vacation fling turn into something more?

A week skiing in the mountains of Utah is the perfect way for Cassie Sumner to mark the start of her postdivorce life. Especially when the mountains aren’t the only gorgeous view . . . But hitting the jackpot with her hot ski instructor doesn’t mean she’s ready for—or interested in—the vacation fling her best friend is encouraging her to have.

One bad experience years ago was enough for Doug Vanderholt to swear off affairs with students. And he’s keeping that promise, even if he can’t stop thinking about Cassie’s smile. He’s remade his life and is only interested in something serious and real.

Doug and Cassie can’t ignore their attraction to each other and they agree that they can handle getting it out of their systems. But as the week draws to a close and their physical attraction turns deeper, they start to wonder if they can turn a vacation fling into something more.

Four Nights to Forever is a book I wrote when I shouldn’t have been writing romance novels. I had separated fro my husband of ten years, written Winning Ruby Heart in a marathon session of deadline-induced writing, and was trying to get up the courage to date.

Bluntly put, the first draft of Four Nights to Forever was terrible. Doug and Cassie not only weren’t attracted to one another, but they were mean to each other. There was emotion, but it was all bad emotion. Angst, but none of the good kind of angst. So I set the book aside and took a real break. I didn’t write anything for a couple months. I saw a therapist. My friends finally convinced me to start dating and, much to my surprise, I enjoyed it. But, the book was still terrible and I didn’t know how to fix it. So, I sent it off to an editor and hoped for the best.

Danielle sent her edits back with a nicely worded, “Your characters don’t like each other. Here’s how we can fix that.” Only she said that in ten pages (!!!) of suggestions. All the time I spent healing was worth it. With fresh eyes and a fresh heart, I took her suggestions and turned something awful into a book I’m proud of.

Cassie and Doug learn how to start over. They’ve made mistakes (including some very serious ones), but that doesn’t mean they can’t find love again. I hope you enjoy their journey as much as I enjoyed creating and recreating it.

Here are people to whom I owe a beer:

With her gaze still over her shoulder, Cassie saw that Karen had acquired a chairmate. Her friend and a young boy—Cassie guessed he was seven—were sliding up and preparing to sit down. Karen waved once quickly, before grabbing the armrest as the attendant helped the child into the seat next to her. Cassie waved back, then turned her attention to the man sitting next to her.

Do I even remember how to flirt with a man? And, God, a possibly twenty-something man, at that?

She’d remembered how to plant her poles, so maybe flirting wasn’t so beyond her. Hell, it had been longer since she’d skied than flirted with a twenty-something man, even if that man had been Tom.

“This lift is mostly full of kids.” She bit her lip and looked over the side of the chair at the lone skier on the run under the lift. She’d neither asked a question, nor seemed interested. Or interesting. She definitely needed practice. She didn’t have to be a hotshot now, just by the end of the week.

He didn’t answer until she’d pulled her attention away from the skier, who was now out of sight. When she looked at him, he was smiling. An easy, attentive smile. Practiced from thousands, maybe millions, of trips up this lift with nervous skiers.

“The ski school’s intermediate area is off this lift, and anyone else who’s using it is trying to get to another lift higher on the mountain.” His smile narrowed into something less rehearsed and more sincere, and she realized she was selling herself short. Maybe he had lots of practice talking to students, but he was sharing the lift with her now and the smile was for her.

Cassie swung her feet, enjoying the freedom of the air below her. She cleared her throat, uncertain what to say next. She wasn’t really surprised when honesty rather than flirtation came out. “I’m sorry about Karen, by the way. She has this vision of my vacation, and I think you play a starring role.”

His goggles still covered his eyes, and she was left to judge his reaction by the set of his lips and the flush of his cheeks. “It’s okay. This is better actually. Being single, I’ve had to politely turn students down before, and at least now I don’t have to. You, I think, are just here to ski.”

Single? No, she couldn’t cling to that piece of information. They were just talking, nothing more. Especially since he’d also told her that he was relieved he didn’t have to turn her down. Just as well. She hadn’t gotten her hopes up, but now at least she could flirt without consequences. Practice for the less interesting, certainly less attractive forty-something businessman in her future.

“And sit in the hot tub with something alcoholic,” she said, smiling and trying to communicate playfulness in the tone of her voice.

His shoulders bounced as he chuckled. “You and everyone else staying in those high-rises along Canyon Road.” He cocked his head at her, and for a brief moment, the glare on his lenses disappeared enough for her to see pleasure in his eyes. “You’ll need a good soak tonight. Your form going down that short slope was fine, but you’ll probably be sore. It will only take a few tweaks over the course of the week before you’re that phenomenal skier again, like I promised.”

She wanted to crawl onto his lap and stay there until the confidence he felt in her soaked through to the marrow in her bones and knit together with how good she already felt to make her unbreakable. Since that would be creepy, she only said, “You’re right. It was just like riding a bike. Hopefully sitting in a hot tub will be the same.” She smiled up at him, not resisting the temptation to hide the gap in her teeth. “It’s been a long time since I’ve done that, too, but I’m hoping my form is still good.”

“You won’t need my instruction for that, I’m sure,” he said. She’d thought his wind-bitten voice sounded playful, but then his smile fell into a blank expression and he turned his head to look over the side of the chair.

She turned to her side to see what he was looking at, but there was only a smattering of skiers bouncing up and down on moguls. Nothing to justify his attention but maybe a good distraction from her flirting, which, judging by the lack of expression on his face, she hadn’t picked back up as easily as skiing.

But it didn’t matter. She’d already been turned down, and this was just for practice anyway. A trial run for when she actually went for a man she could get. Besides, she was here to ski and spend time with Karen, no matter what other plans Karen had.

Let’s see what kind of present we can get you for your birthday, she’d said as they’d unpacked at the condo, and Cassie had seen that her friend had only been mildly exaggerating about the condoms.

The thought of using them with Doug was terrifying, but her belly warmed at the images swirling in her mind. Trying to turn those fiery thoughts to some unknown man left her chilled, even with all the layers she was wearing.

"I like Lohmann’s books because they are intelligent as well as romantic. Not showoff smart, but the characters are thoughtful and reflective." Dearauthor.com

"[Four Nights to Forever is] an encouraging reminder that one just might get another opportunity at love. And in a world way too obsessed with perfection, the promise of a second chance is an optimistic one indeed." All About Romance

"A wonderful, quick read about finding love and that instant connection between two people. It is about starting over, and pushing past your fears and doubts. It is about finding courage and taking a leap of faith." Four Stars on Harlequin Junkies